Skyway West has expertise in all Internet Access Technologies, as well as Network Solutions such as Failover, which can combine ADSL and Cable for the best of both. Contact us for hands-on help in your own Cable vs ADSL debate.

In most towns and cities in Canada, there are two choices in broadband access: cable over coaxial cable or ADSL over copper telephone lines. Cable can achieve faster speeds but those speeds can vary widely; ADSL, while slower, is an inherently more stable technology. This is illustrated in the graphs below, showing network speeds achieved over a week of testing in the Lower Mainland for a 25 Mbps Down/ 2.5 Mbps Up Cable service in yellow and a 15 Mbps Down/ 1 Mbps Up ADSL service in blue. These two technologies have many similarities, but they also have significant differences which means that they each have their own strengths and weaknesses. Understanding these differences is important when choosing which technology to use for a particular business application. 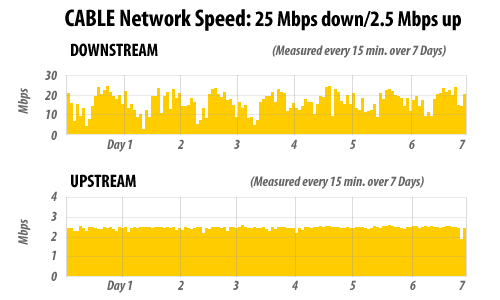 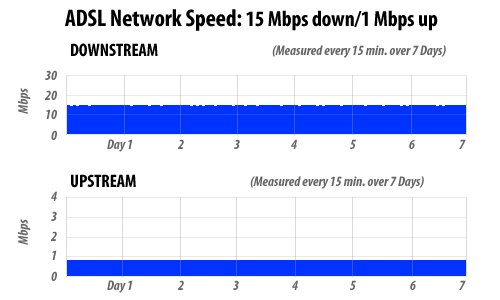 Cable Internet uses a modem at the customer site and a Cable Modem Termination System (CMTS) at the cable company that adheres to the DOCSIS 2.0 or DOCSIS 3.0 standards. The data flowing downstream towards the customer and upstream towards the Internet employ different radio frequencies so that they can co-exist on the same cable. In the downstream direction, an analog TV channel’s worth of frequency spectrum is dedicated to data use. This channel can carry up to 38 Mbps. The upstream channel is typically placed at a lower frequency in the spectrum and can carry approximately 27 Mbps. For example, Shaw Cable uses DOCSIS 2.0 to provide up to 25 Mbps over a single 38 Mbps channel shared by multiple users. For services of 50 mbps or higher Shaw uses DOCSIS 3.0, which allows bonding of multiple 38 Mbps channels.

The Cable Plant and Static IPs

Cable systems today are usually what’s called a Hybrid Fibre/Coax plant (HFC). The town plan is subdivided into serving areas also known as neighbourhoods. Each serving area has a “node”, which contains the CMTS unit and other RF (radio frequency) equipment for sending the signals into the coax cable. All the various nodes are then connected together into a larger network using fibre optic cable. One fibre carries the feed of TV channels into the node for distribution into the coax cable. Other fibres carry the data connections to and from the CMTS. Each node may contain more than one CMTS, and each CMTS may provide more than one downstream and more than one upstream channel. Provisioning software helps decide which modem uses which set of channels.

The cable network can increase the number of channels by physically segregating into more nodes because each node is an independent cable plant and can use the same frequency as another node without collision. The drawback of node-splitting is that cable is unable to offer real static IP addresses. Internet customers moved to a new node must change to new IPs as well.

In the downstream direction there’s only one “talker”, the CMTS, so the CMTS uses various software algorithms to try to “fairly” allocate the limited bandwidth resource to the users. But in the upstream direction each of the 200+ modems on the channel could potentially be trying to transmit at once, causing collisions on the network.

To avoid these collisions the DOCSIS system uses a very complicated system of scheduling. A modem that wishes to send a packet upstream must wait until a Request Window is scheduled. Then, it may chirp a very brief transmit request on the upstream during this window. At that point it may collide with another modem doing the same; if that happens, neither request is heard. But assuming the request gets upstream to the CMTS, the CMTS will schedule a time when the upstream bandwidth will be reserved for for that packet from that modem. During that scheduled time only the particular requesting modem is authorized to transmit. The CMTS advises all modems of the upcoming transmit schedules by means of a special packet on the shared downstream. The transmitting modem waits and listens on the downstream to hear of its transmit schedule, and when it’s the right time, it transmits the packet on the upstream. Then the process repeats for the next packet. If there is more demand than capacity, the CMTS tries to hand out opportunities as best it can, and each modem gets a roughly equal slice of the total bandwidth.

Within a node, where channels cannot overlap each other, there is bandwidth sufficient for about 120 channels each taking a 6 MHz slot. These channels are shared not only by the CMTS, but also by the set-top-box provisioning system, by analog TV, and by the demands of Digital, HDTV and PPV. Each slot could be a CMTS downstream, a single analog TV channel, or 12 to 15 digital TV stations. This means if the cable company wants to offer 250 Mbps downstream out of a particular node, they either add nodes, or must choose to turn off 7 (250 Mbps/38 Mbps per channel) analog channels, or up to 105 (7 x 15) digital TV channels to make room. Since analog TV subscriber numbers are dropping and Internet subscribers are increasing, many cable companies are aggressively converting analog subscribers to digital in order to create space for data.

Now let’s compare that to an ADSL setup. In the ADSL world, data is carried on a telephone line consisting of a twisted pair of copper wires. The wires are run from the customer premise to a telephone company Central Office DSLAM (Digital Subscriber Line Access Module), which may be many kilometers away from the customer. Both at the customer’s end and at the Central Office there is equipment that mixes together and splits apart signals based on frequency. The lowest frequencies are called “baseband” and carry traditional POTS (Plain Old Telephone Service) telephone service. Above baseband is placed the upstream channel, and above that at the highest frequencies is placed the downstream channel. A device called a POTS Splitter is used at the customer end to split the baseband signal apart from the ADSL signals, so that one connects to a phone and the other to an ADSL modem or router.

A long pair of copper wires is a difficult environment for a radio-frequency signal like ADSL. Coax cable of the sort used for Cable TV has little signal loss over distance, and it’s easy to regenerate the signal with amplifiers along the way because each amplifier serves many subscribers at once. But telephone wires will attenuate (weaken) the signal strength quickly as the distance mounts, and it’s not practical to place many amplifiers along the path. Furthermore, the higher the signal frequency, the greater the attenuation. This means the longer the cable, the slower the maximum speed that can be achieved.

When the ADSL modem or router first connects to the DSLAM unit at the telephone company, the two units perform a number of complex tests on the cable between them, and then negotiate exactly how they’ll talk to each other. Each unit collects stats on the signal heard from the other side and then sends hints back to inform the other side how it might adjust its transmission to better be heard. In this way they negotiate a “sync rate”, a maximum downstream and upstream speed which is both optimized and stable based on line conditions.

With Cable, there’s a common channel that many customers share. Sync rates are fixed, and signals do not degrade with distance. But the channel bandwidth is much less than the potential use of all subscribers so there’s often times where congestion prevents users from enjoying the full bandwidth they purchased. The speed seen by the user is sometimes as fast as promised, sometimes less so. It’s difficult to guarantee or reserve bandwidth for a time-sensitive application like VoIP or video conferencing, but it’s a great system for transferring large volumes of data.

With ADSL, each subscriber has their own dedicated channel. The channel is usually slower than the cable channels, and the actual speed is subject to the lay and length of of the phone line that carries it. But once you know the speed that the phone line can provide, you can be confident that that speed is consistent and stable, regardless of what your neighbours are doing. This is a good environment for VoIP or video conferencing, or for applying Quality of Service (QoS) priority queuing for these applications if you are also using the line for data.

Skyway West are experts in all Internet Access Technologies, as well as Business Network Solutions:

4 thoughts on “Cable vs ADSL: What Should You Choose?”